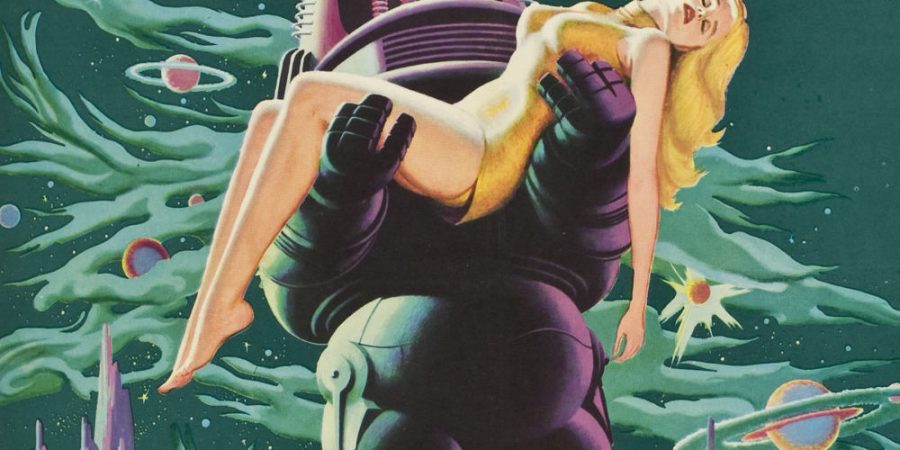 She had atomic purple dreadlocks. They were tied up high on the back of her head with a pink scarf and flowed down her back and over her shoulder onto her chest. They were like the cables and pipes that snaked through our walls and under our feet supporting the ancient infrastructure of the city. Rigid, colour coded and organised, yet filled with the chaotic interaction of a billion strong population of human beings’ remote interaction and the babble of indecipherable computer communication. Her face was pale from the fluorescent lighting of the corridors and tunnels she grew up in, highlighted with a subtle silver blush reflecting the brash metal construction of the city. She wore a battered denim jacket, buttoned at the front. Her name was China.

China was the lead singer and bassist for The Scrapers, a cyberbilly band from out here in the Thetas. In fact, they were the only pure cyberbilly band. The Subsonics had been pretty cyber you know, but mostly more sort of a cyberjazz-rockabilly fusion rather than cyberbilly. Don Fuelta and the Crunch Crew had felt like they were there on the first album back in ‘774, but albums two and three had taken them totally post-cyber. More progressive you know? They had this drive to change what they were playing. The Scrapers invented cyberbilly, and they owned it, and they stuck to it. Totally pure, 110%.

China was their fourth bassist. But although there had been a few bassists, they had all defined the ages of this band.

The acts began with Chris Fury on bass, this was the breakaway. From Thetan hangar venues up to corporate broadcast in under a year like an express tube to Beta. The story goes that they were engaged in some fairly significant hand to hand combat, attempting to get the guitars out of a back room brothel after a gig. Aoife May pulled them out of the sector in a personal transport and signed them to Interplay that night. She tarted them up, recorded a 3play, and hard sold them to the Deltan elite who were buying up property in Lambada that year and calling it west-Delta. It sold by the million and they were a west-Deltan boxhold name overnight. Chris Fury took as much Scintillia as he could afford (which was a lot) and died at their first live show after setting himself on fire at the climax of Break ‘Em and Burn ‘Em.

Then, the age of Joe Cornbar. He grew up in Delta with the elite fanbase they’d become the poster-boys for. But the boy could play bass. He drew out their initial fame fireball for a tour, but the second album was terrible and doused the whole inferno like an original-tech sprinkler system. He had this Deltan-jazz sophistication and complexity when he played, it was such a fluid playing style yet so technical, it just blew me away. But it sounded awful with the rest of the band. All the west-Deltan-fanboys knew the type. He was better than they were, a Deltan with talent, and he didn’t make them feel good. The Deltans only liked this band because they were from Theta, and they could feel superior. This guy made them feel self-conscious. He got snapped up by the Subsonics (fully cyberjazz at the time) immediately afterwards, the Deltans called them cyberbilly after that. No one bought the second Scrapers album though.

The band went rogue. They spent the last of their earnings on Scintillia and hung out in west-Delta (now re-branded East Sigma) pretending they invented the hole. They lived in executive boxes and vicariously demanded entry to clubs they couldn’t afford. They ate, drank and fucked like board members until the money ran out. And when it did, when they were down and the clubs stop bankrolling them. And when Interplay paid them to exit the rest of the contract. Rubin Shark was there, just standing there waiting.

His purpose was to straighten them out, focus their passion and anger. Get them clean, pull them together. Oh, and play bass. He played bass too. What a third album. Wow. Just wow. So much pain, so much to work out of their system. So much darkness, so much melancholia. So powerful. Like some kinf of emotional furnace, there was just SO MUCH. Some might argue too much. Rubin Shark brought them unceremoniously home to Theta and disappeared just after they signed to Thetan Method. Some say he’s here, some say there, it’s not important, he had done what he needed to do for the band, and he retreated back into the shadows.

And so, fresh, recuperated, focused and in touch with their roots, they came back. With China. Some would argue they should never have left the stage they inhabited then. Loud, sudden and quick to start shouting, they were Thetan through and through. Signed to a Thetan label, with a Thetan bassist and the proper sound of Thetan cyberbilly was back. Original and pure.

It’s not important; the six drummers, fifteen guitarists or any of the other singers, it’s the bassists that define this band, and you know what? They shouldn’t have left, they should have got it right first time, they had everything they needed at the beginning. But that’s not what made them who they are and it’s not what makes any of us who we are here in the Thetas. That’s not what made cyberbilly cyber-. Or -billy. What this girl did for the band was ground them and bring them home for us, the Thetan population. She played bass obviously, which I suppose is important in a way, but she linked them to our roots, all of our beginnings. She was young and had managed to grow up in the Thetas because she had fight. We had nothing much to lose in Theta, and we were proud of it. She wasn’t a figurehead and her music wasn’t our anthem at that time, they were just a homegrown Thetan band who hit it big one time. But she was Thetan too. She was young, angry, loud and only wanted to play her guitar for the Theta she loathed and the Theta she loved. And that was it. That was how she started a war.

I was there when they killed her. When the war started. It was a good day to start a war. The week before, there had been riots near the border boxes. Developers had started buying up the nicer Thetan plots outside what was now West West Delta the year before, and the residents only found out when the corporate box tax doubled overnight. The resulting riots saw the corporation defence forces called in to take back West West Delta from Thetan sound systems. The party retreated, but held the Thetan border for two days before the defence forces gave up. A ceasefire was agreed and they withdrew completely, the party was just climaxing six days after that when I was watching the band play at the East Thetan Docklands.

It was the middle of the gig and the crowd were alight, they moved as one, but in no particular direction. The band were in the middle of Demolition Music when the bullet hit her between the eyes. She died instantly and crumpled to the floor, her bass crashed down with her shaking the building. Her dreads were strewn around her, the chaotic babble carried in their colourful order was a confused mess emanating in every direction from the wound in her forehead. The song ended abruptly as the band stopped in shock and amazement. The crowd soon mirrored their sentiment. A few of us who were used to violence, took immediately to cover, checked our exits and looked up into the maze of metalwork in the roof where the shot had originated from. The rest of the crowd caught up eventually, but to the few of us who turned quickly, it was clear to see two black uniforms steal in the silence through the open skylight into the matching black uniform of the domed sky. A defence force sniper team.

The drummer had got up and was hunched over China. After a few seconds he stood up, head low. He walked back to his drums and looked left and right in sombre defiance at his fellow soldiers on the stage. Because he knew straight away that that’s what they were now. The the rising babble of the confused crowd focussed and ended in a solemn silence as we became an army.

Everyone knew what he felt, everyone knew the anger and the sadness of that moment. The toms rumbled the foundation rock of the city as he began to play. Everyone knew it was the time, there was nothing more to lose and we would not go silently into this night. The beat sped up until it formed itself into the fast rumble that was the beginning of Requiem for Surf City from the bands first album. It didn’t take the Thetan hoards the full length of the 6 minute epic to mobilise the wheels of the revolution. The Thetan-Deltan war began that night.

She didn’t die in any of the battles of the next nine years, she didn’t take any Deltan stronghold and her resting place is not numbered amongst any of the soldiers’ graves. But it’s her we have a statue of as you enter the board building. She died a hero and she changed our world forever. She died because she fought to be alive and because while she was, she lived. She was just young, angry and loud. Nothing more than any of us could be, nothing less. Pure Theta, pure heart, and pure cyberbilly.